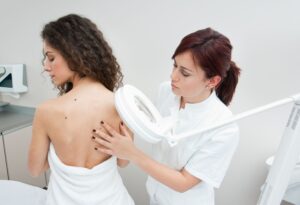 Many residents have moles on their bodies, but they don’t know what type of moles they have. This can be a dangerous scenario. Knowing the exact type of moles you have, as well as if some of them may require mole removal, is important to your overall health.

Here is a discussion of the 3 types of moles that patients may have, as well as whether or not the mole type requires mole removal.

A congenital mole is a mole that a patient is born with. About 1 in 100 people are born with congenital moles. If you have a child who was born with moles, it’s important that you schedule annual skin examinations for him or her – from youth all the way through adulthood, as congenital moles are more likely than other mole types to become melanomas.

It’s extremely common for children and very young adults to develop moles. These moles are called acquired moles and are usually harmless.

However, any time a resident acquires a new mole, it needs to be examined by Dr. Perri of Perri Dermatology. While acquired moles typically don’t require mole removal, it’s always better to get a medical opinion and be safe rather than sorry

If you have a mole that doesn’t look like the other moles on your body, you need to consult with Dr. Perri ASAP. Atypical or Dysplastic moles usually require mole removal because they are more likely to be melanomas.

If a resident discovers a new mole on his or her body that looks different from the other moles he or she has, or if the patient notices that a mole has recently changed, he or she should think about the following ABCDEs of moles:

Healthy moles are usually even in shape. An asymmetrically shaped mole needs to be examined by Dr. Perri.

If you have a mole that has a jagged border, it could be a sign that it contains cancerous or precancerous cells.

Normal moles are one solid color. If a mole is multi-colored, it’s a sign that it could be an unhealthy mole.

Most healthy moles are equal to or smaller in size than the size of a pencil’s eraser. If you have a mole that is larger, it could be fine, but it may also be a sign that the mole is cancerous.

While there are perfectly normal reasons why a mole may begin to show changes, such as pregnancy, sometimes when a mole’s appearance evolves it’s a sign that something is wrong.

Get Your Moles Examined by Dr. Perri

If you have moles and you’ve never had them examined by a dermatologist before, you should see Dr. Perri at Perri Dermatology ASAP. Annual skin examinations, and in some cases more frequent appointments, are also necessary to assess the current condition of your moles.