Erythema Nodosum, also called septal panniculitis, is the most common form of panniculitis that I encounter in both my The Woodlands dermatology and Conroe dermatology offices.  Although, Erythema Nodosum can occur at any age and sex, it is most often seen in young adult females.  Clinically, Erythema Nodosum appears as a spontaneous eruption of red/brown tender nodules on the lower legs; however, some lesions can be found on the upper body including the face.  When the nodules first appear, many patients may experience fatigue, fever, arthritic symptoms, headache, conjunctivitis, and gastrointestinal distress.  In most cases, the nodules disappear after a few weeks without any scarring.  Erythema Nodosum is a reactive process meaning it occurs as a result of some other unrelated process.  Strep infections are the most common cause of Erythema Nodosum in children, but other infections have been implicated.  Autoimmune diseases such as Sarcoidosis, Bechet’s Disease, Inflammatory Bowel Disease may have Erythema Nodosum as a sequelae.  Certain medicines have been implicated as well including: oral contraceptives, hormone replacement therapy, sulfas, iodides, bromides to name a few.  Unlike other types of panniculitis, Erythema Nodosum has a unique histologic pattern called septal in which the inflammation is around the septum of the fat lobules and not actually in the actual lobules.  Treatment of Erythema Nodosum involves identifying any underlying etiology and treating the source.  Bed rest is very important and limiting exercise as well as leg elevation.  Non steroidal medicines are also very helpful such as aspirin or indomethacin.  Potassium iodide has also been found to be a very effective treatment.  Intralesional steroids and systemic steroids have also been successful.  Rarely are antimalarials and colchicine used as a treatment alternative. 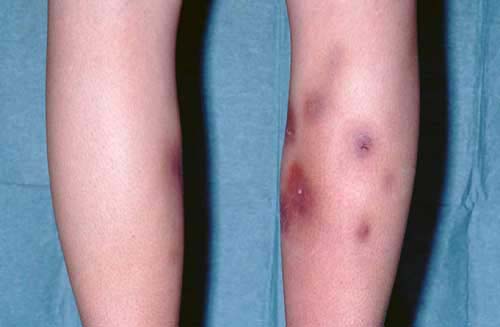