Mycetoma, also called Madura foot, is an infection that usually involves the foot caused by either filamentous bacteria or fungi which I encounter in both my The Woodlands dermatology and Conroe dermatology clinics.  Typically, the infection begins with traumatic inoculation into the instep or the toe webs of the foot.  However, any body part can become inoculated including the hands, face, arms, buttocks, chest and back.  The two types of mycetoma are: Actinomycetoma- caused by bacteria; Eumycetoma- caused by fungi.  Nocardia,Actinomadura and Actinomycesare the most common bacteria causing Actinomycetoma. Madurellais the most common fungus causing Eumycetoma.  Both types of mycetomas are slowly progressive and have the same clinical presentation.  Deep subcutaneous swelling in the infected area gives rise to draining sinuses.  Grains are substances that emerge from the sinuses and the color of the grains can indicate the causative organism.  For instance, black grains are usually caused by pigmented fungi and red grains are due to Actinomyces pelletieri.  Eventually, underlying structures such as  fascia, muscle and bone can become involved.  Mexico is the most common area where mycetoma infections occur, but they can also be seen in Africa, South America, and India.  Diagnosis of mycetomas is usually clinical by observing the triad of tumefaction (subcutaneous swelling), grains, and sinuses.  Skin biopsies may be helpful but a fungal/bacteria culture is necessary to guide treatment.  Actinomycetomas respond best to antibiotic therapy.  Actinomyces is best treated with Penicillin, whereas Nocardiarequires Bactrim.  Treatment with the -Azoles is needed in Eumycetomas.  In both cases, surgical excision is curative for small early lesions. 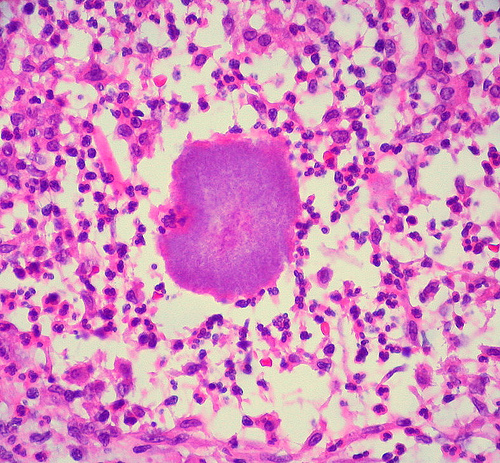