Melanoma is a very lethal skin cancer that I frequently encounter in both my The Woodlands dermatology and Conroe dermatology clinics.  Melanomas arise from melanocytes which are pigment producing cells that can become cancerous.  The majority of Melanomas arise from the melanocytes found at the dermoepidermal junction which is in the upper portion of the skin; however, large congenital nevi that develop into Melanomas typically begin with the cancerous changes from melanocytes in the deeper portions of the dermis.  Most Melanomas appear dark due to the origin cell type which is responsible for the normal pigmentation of the skin.  Half of all Melanomas arise from pre-existing nevi which then convert to a Melanoma at some point in time and half arise de novo from normal appearing skin devoid of any nevoid lesions.  The causes of Melanoma are multifactorial as genetics does play a major role in Melanoma development.  The genetics of Melanoma is very complicated as many different causative genes are involved and these genes vary depending on the specific type of Melanoma and location on the body.  In general, first degree relatives of a Melanoma patient are at increased risk of developing a Melanoma and must take the proper sun protection and screening precautions.  UV exposure is a major environmental risk factor that can cause Melanomas especially tanning beds and a history of blistering sun burns.  Patients with fair skin and blue or green eyes are especially susceptible to the development of Melanoma.  Melanomas are rare in childhood and usually are seen in very large congenital nevi.  The incidence of Melanoma rises after adolescence.  Early detection of a Melanoma is of utmost importance, as the majority of Melanomas begin with a non-invasive horizontal (radial) growth phase in which they have not invaded into the highly vascular (blood vessel rich) dermis.  Once a Melanoma enters its vertical phase and penetrates the dermis, metastasis to the rest of the body can occur.  Melanoma is so deadly because once it has metastasized there are very limited treatments that have any effect on prolonging survival and slowing the cancer.  An ABCDE algorithm has been established for patients to observe their moles for findings that may indicate a Melanoma exists or is developing.  A- asymmetry of the lesion, B- irregular borders, C- mulitple colors, D- diameter over 6mm, E-evolution.  In my opinion, E is the most important criteria as Melanomas evolve and change with increasing size, change in shape, changing colors, or the development of symptoms such as bleeding.  Thus, any change in a mole or the development of a new mole should be evaluated immediately by a board certified dermatologist.  There are multiple subtypes of Melanoma- Lentigo Maligna, Superficial Spreading Melanoma, Acral Lentiginous Melanoma, Nodular Melanoma, Amelanotic Melanoma, Mucosal Melanoma, Polypoid Melanoma, Desmoplastic Melanoma, Amelanotic Melanoma, and Soft Tissue Melanoma. 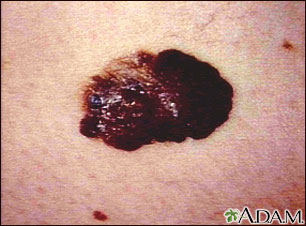