What Makes Acral Lentiginous Melanoma Different From Other Types of Melanoma? 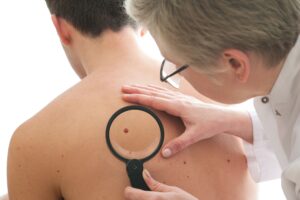 Melanoma is a serious form of skin cancer that, if not caught early, can be deadly. While Melanoma only accounts for 5% of skin cancer diagnoses, it’s responsible for 75% of skin cancer deaths. Dermatologist Dr. Perri first became interested in the field of dermatology when an early Melanoma diagnosis saved his father’s life. Dr. Perri is well educated on the many different types and treatments of Melanoma skin cancer.

Benign moles are usually smaller in size, typically about 6mm in diameter and no bigger than the eraser on your pencil. But Acral Lentiginous Melanoma is much larger, often several cms larger at the time of diagnosis.

Just like with all cases of Melanoma skin cancer, one of the biggest warning signs of Acral Lentiginous Melanoma is that it evolves, or changes over time. Any type of change is troublesome, including a change in size, shape, color, and elevation or even if the spot has recently started bleeding, itching or crusting. In the case of Acral Lentiginous Melanoma, the spot typically starts out with a smooth surface at first but later transforms to a thicker lesion that may become dry or have a wart-like appearance.

I think I have Acral Lentiginous Melanoma Skin Cancer. What do I do next?

Patients who suspect they may have Acral Lentiginous Melanoma should immediately make an appointment with dermatologist Dr. Perri. Dr. Perri will perform an annual skin cancer screening, checking your body from head to toe, while paying careful attention to the spots that are troublesome to you. If after his exam, he suspects you have Acral Lentiginous Melanoma, he will schedule a biopsy. The biopsy includes numbing the area with a general anesthetic, then using a scalpel to cut the lesion or a portion of the lesion out. The biopsied sample will then be sent off to a lab for further analysis, which should have results back in 14 days.